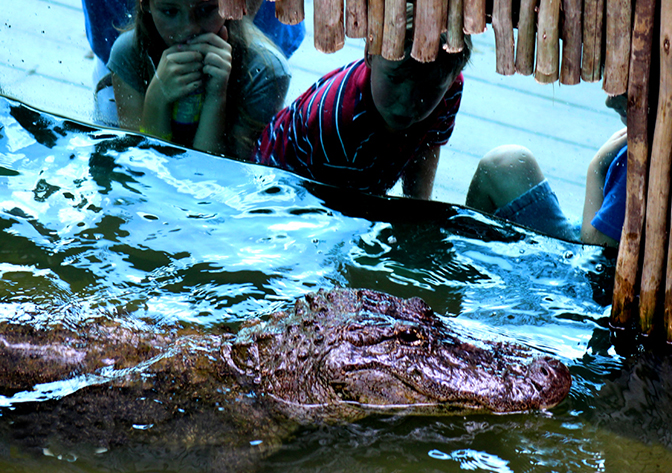 Range:  The American alligator is found in the United States from North Carolina to the Rio Grande in Texas. Alligators are usually found in freshwater, slow-moving rivers. They also live in swamps, marshes and lakes.

Description: The American alligator is the largest reptile in North America. It has a long armored body with thick scales or bony plates called osteoderms or scutes. It has short, powerful legs and a long, round snout. (The American crocodile has a long, pointed snout.) 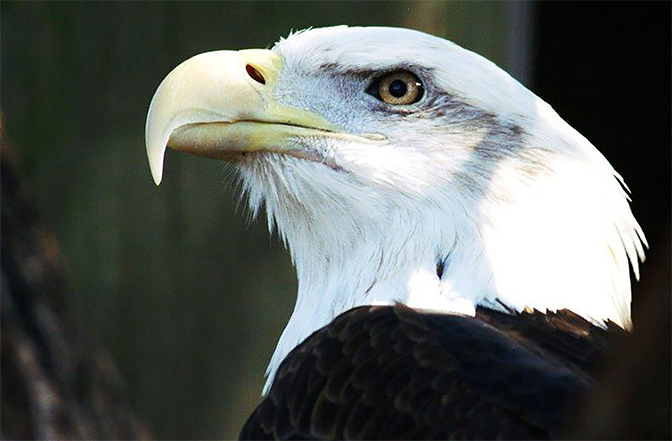 The Bald Eagle is a bird of prey found in North America. A sea eagle, it has two known subspecies and forms a species pair with the white-tailed eagle. Clearly recognized by its white head, brown body, and hooked yellow beak, the bald eagle has been the national emblem of the United States of America since 1782.

Range:  Includes most of Canada and Alaska, all of the contiguous United States, and northern Mexico.  Bald eagles prefer living in areas close to bodies of water, as their favorite prey is fish. They can be found in wetlands, on the coasts, near lakes or rivers, and in marshes.

Description: Known as a raptor, it displays a white head at maturity, brown body, and hooked yellow beak. Eagles have an impressive wingspan reaching 6-7.5 feet.

Lifespan: 20-30 years in the wild, and some eagles in captivity have lived up to 50 years. Currently, their population is thriving with a status of least concerned. 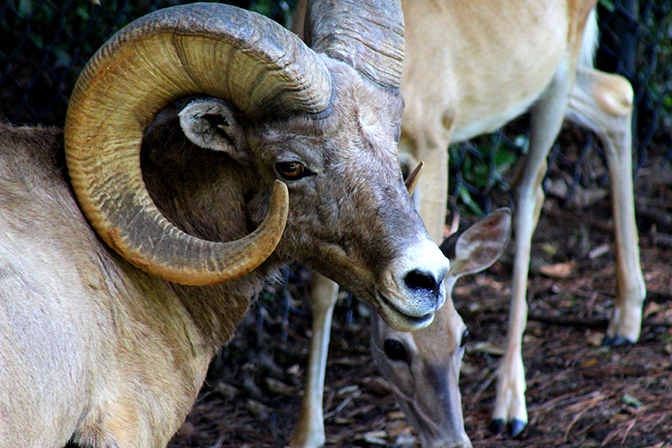 Range:  Bighorn sheep live in the western mountainous regions of North America, ranging from southern Canada to Mexico. Their steep mountainous habitat, with ledges sometimes only two inches (five centimeters) wide, provides cover from predators such as coyotes, golden eagles, mountain lions, bears, and Canada lynx. Bighorn sheep live in alpine meadows, mountain slopes, and foothills. They like areas with rocky slopes that they can climb to evade predators.

Description: Bighorn Sheep are large mammals that are relatives of goats. They have short brown fur, a white muzzle and rump patch. They have split hooves which aid in balance and rough hoof bottoms for natural grip. Their sure footing help them move easily around rugged mountain terrain. Horns are found on bison and other bovines, as well as big horn sheep, pronghorn antelope, and goats. The big difference between horns and antlers is that horns have a boney core but they are made up of keratin, which is similar to the materials that your hair and fingernails are made of.

Diet: Although the diet of bighorn sheep varies according to the habitat and season, bighorn primarily eat grasses, shrubs, and forbs. Some favorite shrubs for desert bighorn sheep are acacia or catclaw, encelia, sweetbush, and krameria.

Lifespan: Rams typically live 9-12 years, while ewes usually live 10-14 years. It has been reported that these animals live up to 24 years in captivity, which could be overestimated. Average longevity in captivity is 21 years. 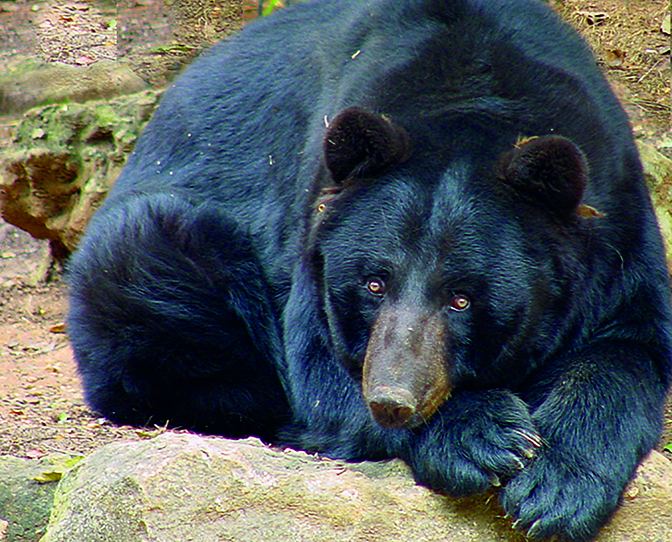 Description: Adult black bears are approximately 4 to 7 feet from nose to tail, and two to three feet high at the withers. Males are larger than females. Black bears have small eyes, rounded ears, a long snout, large non retractable claws, a large body, a short tail, and shaggy hair. Adult male hit the scales at 400 – 660 pounds, while females are extremely smaller only weighing 90 – 180 pounds.

Diet: Black bears are very opportunistic eaters. Most of their diet consists of grasses, roots, berries, and insects. They will also eat fish and mammals; including carrion. They can also easily develop a taste for human foods and garbage.

Lifespan: The average lifespan in the wild is 18 years, though it is quite possible for wild specimens to survive for more than 23 years. The record age of a wild specimen was 39 years, while that in captivity was 44 years. Range:  Major populations of Canadian lynx, Lynx canadensis, are found throughout Canada, in western Montana, and in nearby parts of Idaho and Washington. There are small populations in New England and Utah and possibly in Oregon, Wyoming and Colorado as well. Lynx are generally found in moist, boreal forests that have cold, snowy winters and a high density of their favorite prey: the snowshoe hare. Lynx can be found throughout much of the boreal forest of Alaska and Canada.

Description: The Canada lynx has very thick, light brown or gray fur with light black spots. It has large ears with long black tufts at the ends. Its tail is short with a black tip at the end. It has a pointed, beard-like ruff and long legs with big paws. Its huge paws have adapted in such a way that they can easily help the wild cat maneuver through deep snow while providing for a strong grip.

Diet: Canada lynx eat mice, squirrels, and birds, but prefer the snowshoe hare. The lynx are so dependent on this prey that their populations fluctuate with a periodic plunge in snowshoe hare numbers that occurs about every ten years. Bigger Eurasian lynx hunt deer and other larger prey in addition to small animals.

Lifespan: Females reach sexual maturity at ten months, although they often delay breeding for another year, whereas males reach maturity at two or three years. Canada lynxes have been reported to live for up to 16 years in wild, though most do not make it beyond 10 years; in captivity the lifespan may be as long as 27 years. 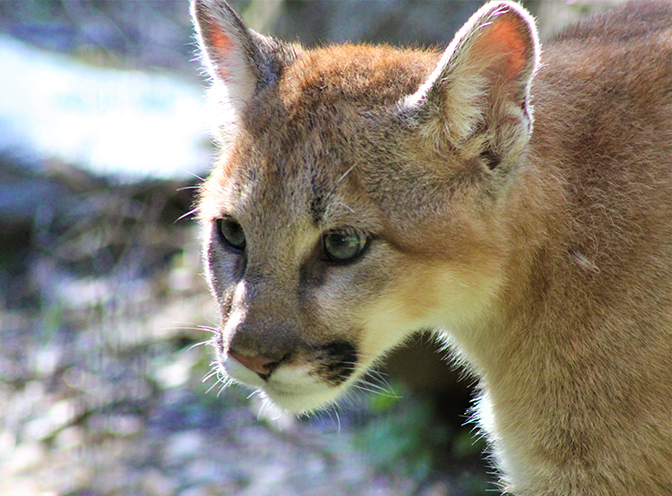 Range:  Cougars range from northwestern Canada to Patagonia, South America. Click on a range map to see where cougars live in Washington and California. Cougars make their dens in rocky ledges, dense thickets and under uprooted trees. They are very adaptable and can survive in tropical forests, swamps, grasslands, mountain conifer forests, desert scrub, and any location with adequate cover and prey. Cougars prefer densely forested areas in coastal swamps, rocky cliffs and mountain ranges as their habitat.

Description: Cougars have long, slender bodies and small, broad, round heads. Ears are short, erect and rounded. The short fur is usually tawny (brownish red-orange to light brown), more tan in the summer months and grayer during the winter. The muzzle, chin and underparts are a creamy white.

Diet: Cougars are carnivores, which means they eat meat. The eastern cougar's main food source is the white-tailed deer. A cougar kills and eats from one deer every seven to 10 days. They will also kill and feed on other smaller animals such as rabbits, porcupines, raccoons, even mice.

Lifespan: Life expectancy in the wild is reported at eight to 13 years, and probably averages eight to 10; a female of at least 18 years was reported killed by hunters on Vancouver Island. Cougars may live as long as 20 years in captivity.

Cougars are also called: Mountain lion, puma, cougar, panther. This cat is known by more names than just about any other mammal! But no matter what you call it, it's still the same cat, Puma concolor, the largest of the small cat species. 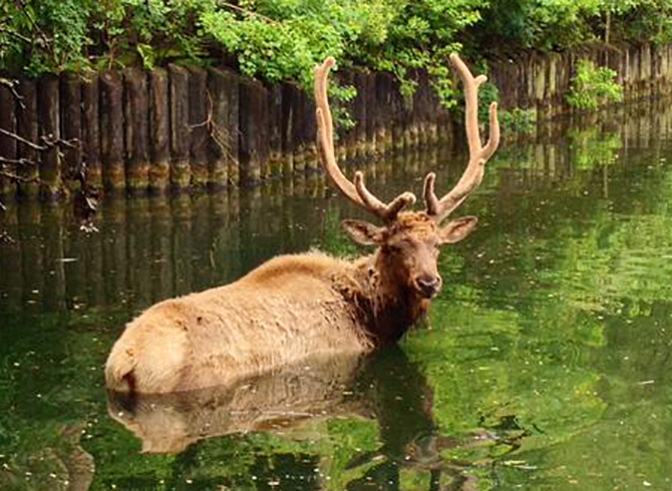 Range:  Elk were once found across much of North America but they were killed off and driven to take refuge in more remote locations. Today they live primarily in western North America, especially in mountainous landscapes such as Wyoming's National Elk Refuge and Yellowstone National Park. The major habitat of the elk is forest, forest edge and alpine meadows. Elks found in mountainous areas, usually live at high elevations in summer and migrate down the slope by winter. However, this animal is very adaptable, due to which it's also found in semi-deserts of North America.

Description: An elk's body can range from a pale gray to tan and brown; brown or tan above and darker underneath. Elk have slender legs and a thick neck. Their legs, head, and thick neck fur are a darker brown. Their rump patch and very short tail are a light tan color. Most deer and elk shed their antlers during March and April, a time when their testosterone levels are generally at the lowest. The low testosterone levels causes the bone connected to the base of the antler to deteriorate and eventually fall off.

Diet: Elk are herbivores, which means they only eat vegetation. Their diet changes depending on the year, eating grasses in the summer and woody growth in the winter months, according to the ADW. They prefer dandelions, violets, hawkweed, aster, clover and mushrooms as their favorite treats. 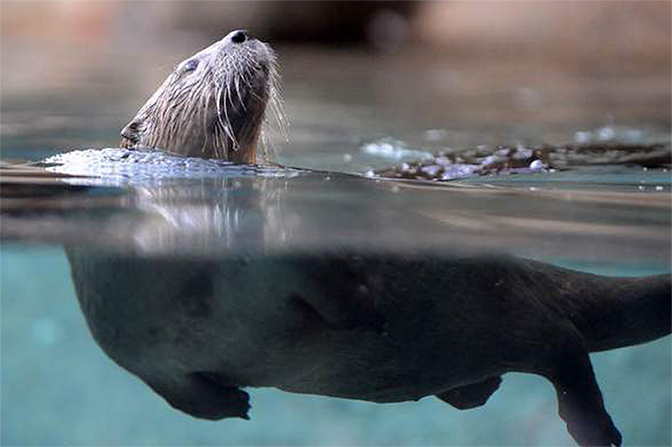 Range:  A wide variety of aquatic habitats, both freshwater and coastal marine, including lakes, rivers, inland wetlands, coastal shorelines, and marshes. River otters are found throughout most of North America from the Rio Grande to Canada and Alaska, except for in arid deserts and the treeless Arctic. They live in riparian zones, often in the same areas as beavers. Their aquatic habitats can be both marine and fresh water: streams, rivers, lakes, ponds and marshes.

Lifespan: In captivity, the average lifespan is 21 years. They normally live about 8 to 9 years in the wild. 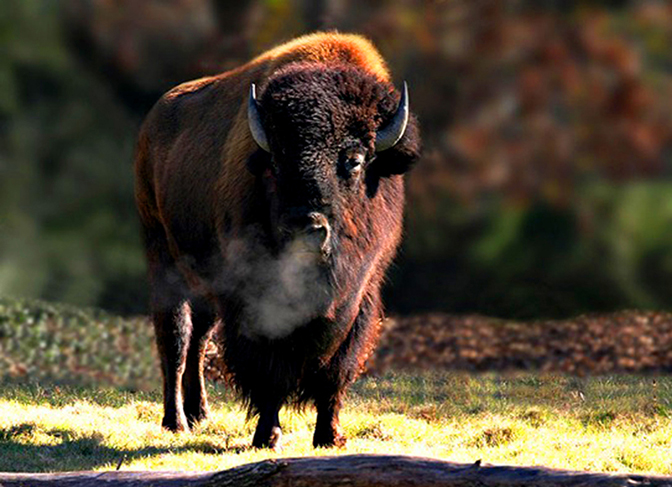 Description: The bison has long shaggy brown fur, a mane and beard under its chin and a long tail with a tuft of hair at the end. It has a big head with short black horns and a hump on its shoulders. They are also tall animals, with the height at the shoulder ranging from 7-8 feet for males and 6-7 feet in females. Two distinctive features of bison are the shoulder hump and their huge head. Fur color is brown, varying slightly from the front and back of the animal. Both male and female bison have short, curved, black horns, which can grow to two feet long.

Diet: Bison are herbivores, feeding on the grasses of the prairie land all year round. They will generally rest during the day and graze in the mornings and evenings. Bison also need to find water every day.

Lifespan: At three years of age, bison cows are mature enough to produce a calf. Bison have a life expectancy around 15 years in the wild and up to 25 years in captivity.

Why do we call bison buffalo? They often give them the same name as some European species they were familiar with. They gave the American bison or simply bison (Bison bison) the name buffalo because they looked like Asian water buffalo or the African buffalo. The American bison is closely related to the European bison (also known as wisent). 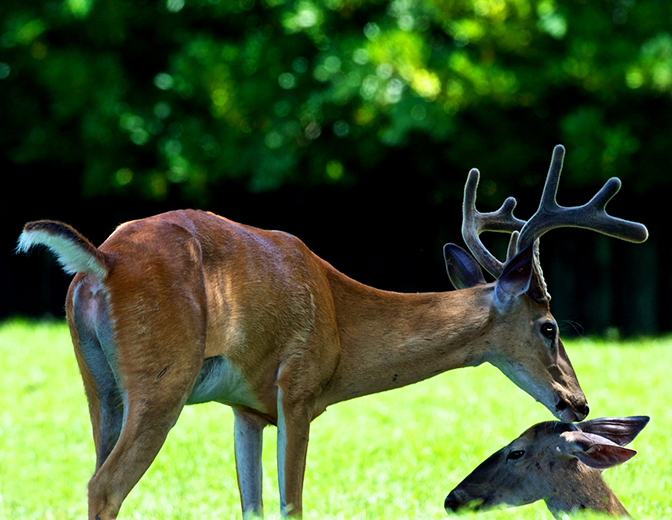 Range:  The white-tailed deer can be found in southern Canada and most of the United States, except for the Southwest, Alaska and Hawaii. A deer's home range is usually less the a square mile. Deer collect in family groups of a mother and her fawns. When a doe has no fawns, she is usually solitary. White-tailed deer can adapt to a wide range of habitats. They are commonly found in temperate forests, partially wooded lowlands, open prairies, savannahs, mountains, tropical forests, and wetlands.

Description: The white-tailed deer is tan or brown in the summer and grayish brown in winter. It has white on its throat, around its eyes and nose, on its stomach and on the underside of its tail. The male has antlers. Males weigh between 150 and 300 pounds and females weigh between 90 and 200 pounds. Unlike horns on cattle which are permanent, male deer lose and re-grow their antlers every year. In the whitetail deer family only bucks over 1 year old have antlers. During winter bucks lose their antlers and then begin to re-grow new antlers. As the antlers grow they are covered in a soft hairy skin called velvet.

Diet: White-tailed deer are herbivores, leisurely grazing on most available plant foods. Their stomachs allow them to digest a varied diet, including leaves, twigs, fruits and nuts, grass, corn, alfalfa, and even lichens and other fungi.