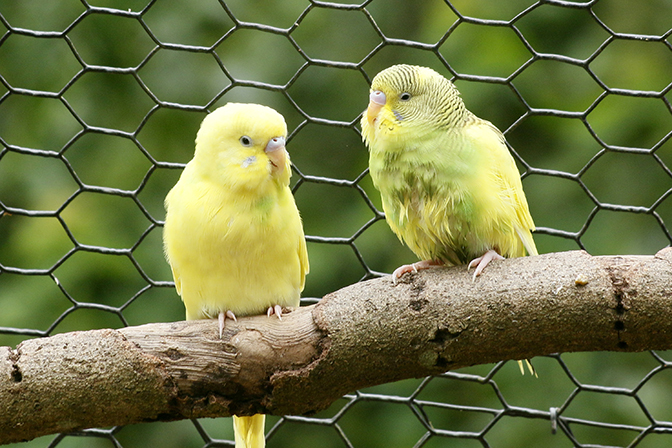 Range: Budgerigars are found in open habitats, primarily in scrublands, open woodlands, and grasslands of Australia. Budgerigars have an extensive natural range, they are found through most of Australia's interior west of the Great Dividing Range. They are not found in Tasmania, Cape York, or the coastal areas of eastern, northern or southwestern Australia. The birds are normally found in small flocks, but can form very large flocks under favorable conditions.

Description: Wild budgerigars average 7 inches long, weigh 1.1–1.4 ounces, 12 inch wingspan, and display a light green body color (abdomen and rumps), while their mantles (back and wing coverts) display pitch-black mantle markings (blackish in fledgelings and immatures) edged in clear yellow undulations. Bird experts prefer that budgies not be called parakeets, since parakeet is a common term for several small parrot-type birds with long tails. A budgie is a parakeet but a parakeet is not always a budgie. Budgies come in over a thousand color mutations. As the bird matures, the cere* color changes.  * Young male budgies have a rose or bluish-purple cere. Around the nares there are white rings in female birds which can hardly be seen, the rest of the cere is colored whitish-blue.

Diet: Seeds are nutritionally imbalanced and high in fat, and parakeets that become accustomed to seeds are very hard to switch to a better diet later on. Offer your parakeet a wide variety of fresh foods early on: vegetables, leafy greens, fruits, pasta, rice, beans, sprouted seeds.

Lifespan: In captivity, budgerigars live an average of five to eight years, but life spans of 15–20 years have been reported. The life span depends on breed, lineage, and health, being highly influenced by exercise and diet.

Make sure to swing by Parakeet Cove while visiting the Zoo for a fun encounter with our parakeets.  These lovable and colorful birds fly freely in an enclosed aviary while guests walkabout enjoying time with them in their natural surroundings. For an additional adventure, purchase a $2 bird feed stick and make a new best friend or two.  Parakeet Cove is located near the entry to the Skylift Adventure Ride in the Zoo’s Australian realm. 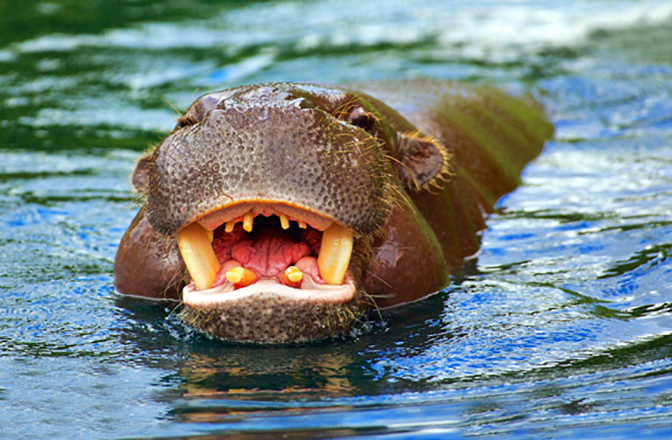 Range: Pygmy hippos have a small range, and are only found in the interior portions (away from the coast) of West Africa. They are more common in Liberia than anywhere else. This species prefers forested areas, and they live near streams, rivers, or swamps. They are native to the forests and swamps of West Africa, primarily in Liberia, with small populations in Sierra Leone, Guinea, and Ivory Coast. The pygmy hippo is reclusive and nocturnal.

Description: They stand 2.5 feet tall and measure 5 feet from head to tail. The pygmy hippopotamus displays many terrestrial adaptations, however, like its larger cousin, it is semi-aquatic and relies on to water to keep its skin moisturized and its body temperature cool. Its nose and ears close underwater just like a hippo's do, but its head is rounder and narrower, its neck is proportionally longer, and its eyes are not on the top of its head. The top layer of the pygmy hippo's greenish-black skin is smooth and thin to help the animal stay cool in the humid rain forest.

Diet: Pygmy hippos are herbivorous. They do not eat aquatic vegetation to a significant extent and rarely eat grass because it is uncommon in the thick forests they inhabit. The bulk of a pygmy hippo's diet consists of ferns, broad-leaved plants and fruits that have fallen to the forest floor. 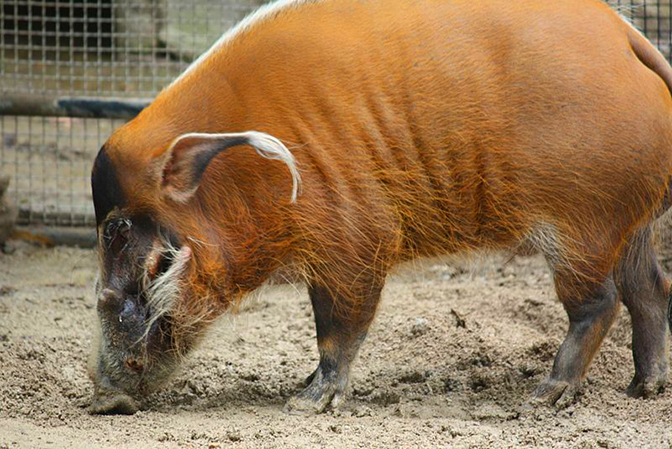 Range: The Red River Hog also known as the bush pig is a wild member of the pig family with most of its distribution in the Guinean and Congolian forests. It is rarely seen away from rainforests, and generally prefers areas near rivers or swamps. Red river hogs are found in western and central Africa. They range from the Congo area and the Gambia to the eastern Congo, southwards to the Kasai and the Congo River. Red river hogs live in rainforests, wet dense savannas, and forested valleys, and near rivers, lakes, and marshes.

Description: The Red River Hog has striking orange to reddish-brown fur, with black legs and a tufted white stripe along the spine. Adults have white markings around the eyes and on the cheeks and jaws; the rest of the muzzle and face are a contrasting black. The fur on the jaw and the flanks is longer than that on the body, with the males having especially prominent facial whiskers. Unlike other species of pig native to tropical Africa, the entire body is covered in hair, with no bare skin visible.  Adults weigh 99 to 254 lb and stand 22 - 31 inches tall, with a length of 39 - 57 inches. The ears are also long and thin, ending in tufts of white or black hair. Boars are somewhat larger than sows, and have distinct conical protuberances on either side of the snout and rather small, sharp tusks. The facial protuberances are bony and probably protect the boar's facial tendons during head-to-head combat with other males.

Diet: The species is omnivorous, eating mainly roots and tubers, and supplements its diet with fruit, grasses, herbs, eggs, dead animal and plant remains, insects, and lizards. It uses its large muzzle to snuffle about in the soil in search of food, as well as scraping the ground with their tusks and fore-feet. They can cause damage to agricultural crops, such as cassava and yams.

Lifespan: Red river hogs breed seasonally, so that the young are born between the end of the dry season in February and the midpoint of the rainy season in July. The oestrus cycle lasts 34 - 37 days. Gestation lasts 120 days. In the wild, red river hogs can live an estimated 15 to 20 years. In human care, they normally live up to 20 years.

Make sure to swing by to see our Red River Hogs while visiting the Zoo. They are located near the entry to the Skylift Adventure Ride in the Zoo’s Australian realm.