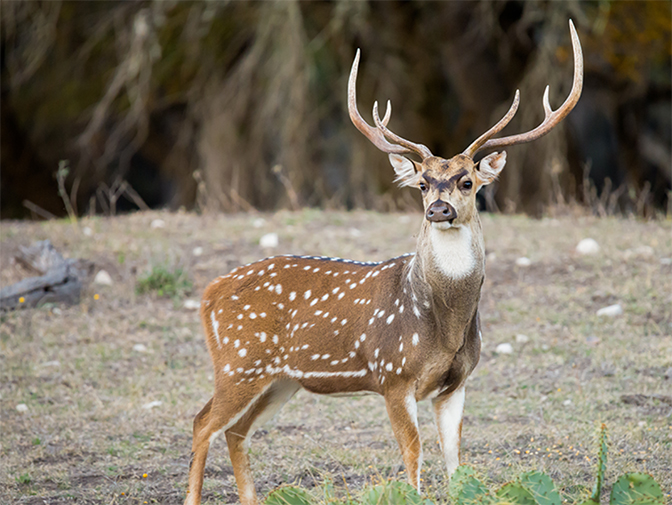 Range:  Axis deer, also known as spotted deer and chital deer is a species of deer that is native in the Indian subcontinent. Native Asian Indian deer, Axis deer can be found in open areas during warm periods of the day, but are primarily active at dusk or dawn. Since the axis deer prefer warm weather they thrive in the state of Texas. They feed on grass and sedges in fields near wooded or sheltered areas. In 1932, axis deer were introduced to Texas. In 1988, self-sustaining herds were found in 27 counties, located in Central and South Texas. The deer are most populous on the Edwards Plateau, where the land is similar to that of India.

Description: The Axis deer is a beautiful mammal with spotted body and short tail. Both males and females have markings on their bodies; the markings are white, running in rows along the length of their bodies. The body of Axis deer is bright golden brown in color while the head is a bit lighter shade of the same color.

Diet: The Axis deer are herbivores (folivores). Their diet usually consists of grasses, flowers and fruits, fallen from the trees. When the monsoon season comes, grasses and sedges in sal forests become the main source of food for these animals. They also prefer mushrooms which are rich in proteins and nutrients.

Lifespan: The average lifespan of axis deer is nine to 13 years with documented cases of 20 years in captivity. Female axis deer reach maturity at two and remain fertile until 15 years of age. Male axis deer compete for females during their rut season by fighting other males.

Description: The Bengal tiger is the largest member of the cat family.  It’s size, coat color, and markings vary with each subspecies.  The Bengal Tiger is the most common of all the subspecies; however, is considered an endangered species.

Why are some Bengal tigers white? Bengal tigers typically are orange in color; however, white tigers are reported in the wild from time to time in the Indian states of Assam, West Bengal and Bihar. Such a tiger has the black stripes typical of the Bengal tiger, but carries a white or near-white coat.

Lifespan: Healthy Bengal tigers live 8-10 years in the wild.  In captivity, they can live up to 16 years old.
Blackbuck 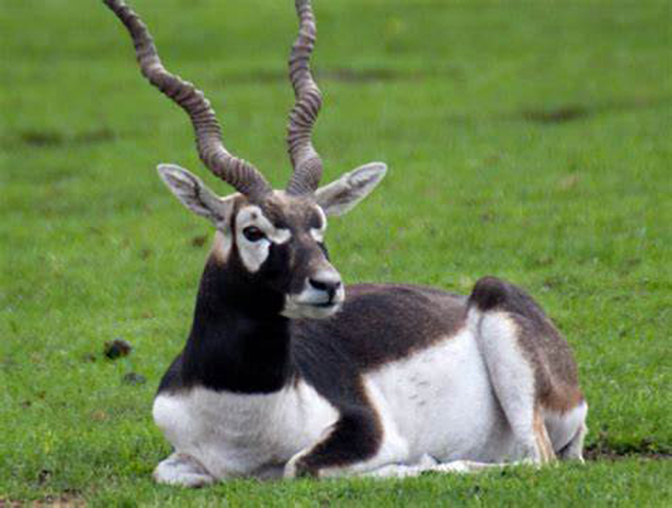 Range:  The blackbuck inhabits grassy plains and slightly forested areas. Due to their regular need of water, they prefer areas where water is perennially available. The antelope is native to and found mainly in India, while it is extinct in Bangladesh.

Description: The blackbuck is one of the few antelope whose color differs between sexes. The males are rich dark brown above, on the sides, and on the outside of the legs. Females tend to be yellowish in the same areas. Both sexes exhibit white underparts and insides of the legs, and a prominent white circular patch around the eye.

Diet: The blackbuck eats mainly grasses. As summer dries these, it eats more browse. Pods, fruits, and flowers supplement this diet. Blackbucks are timid at feed stations and will stand back while other animals feed.

Lifespan: The lifespan is typically 10 to 15 years. In captivity, a healthy blackbuck can live 20-25 years.

Range:  Fallow deer are native to southwest Asia, but were anciently (9,000 years ago) introduced to the Mediterranean region. The fallow deer was spread across central Europe by the Romans. Until recently, the Normans were thought to have introduced them to Great Britain for hunting in the royal forests. However, recent finds at Fishbourne Roman Palace show that fallow deer were introduced into southern England in the first century AD. These deer often live in woodlands, deciduous forests, mixed forests, marshes, meadows, and agricultural areas.

Description: A medium-sized deer, similar to sika (intermediate between roe and red deer). Typically has a spotted coat, with a longer tail than other deer, constantly twitching. There is a white “target” with black margins, and a black stripe down the tail. Males have palmate antlers.

Lifespan: The average life span of Fallow deer in the wild ranges between 12 and 16 years. In captivity, a healthy Fallow deer can live 20 years. Range:  Indian rhinos are found throughout the Indian subcontinent. Once roaming the large areas of Asia, they are now in very small areas of India. The preferred habitat of an Indian rhinoceros is alluvial flood plains and areas containing tall grasslands along the foothills of the Himalayas. Formerly, extensively distributed in the Gangetic plains, today the species is restricted to small habitats in Indo-Nepal terai and northern West Bengal and Assam.

Description: The largest of the rhino species, Indian rhino weigh up to 8,000 pounds. The single horn is found in both males and females. The Indian rhinoceros has a thick grey-brown skin with pinkish skin folds and one horn on its snout. Its upper legs and shoulders are covered in wart-like bumps. It has very little body hair, aside from eyelashes, ear fringes and tail brush. Males have huge neck folds.

Lifespan: Healthy Indian rhino may live to 30 years in the wild.  In captivity, they can live up to their late 40s. 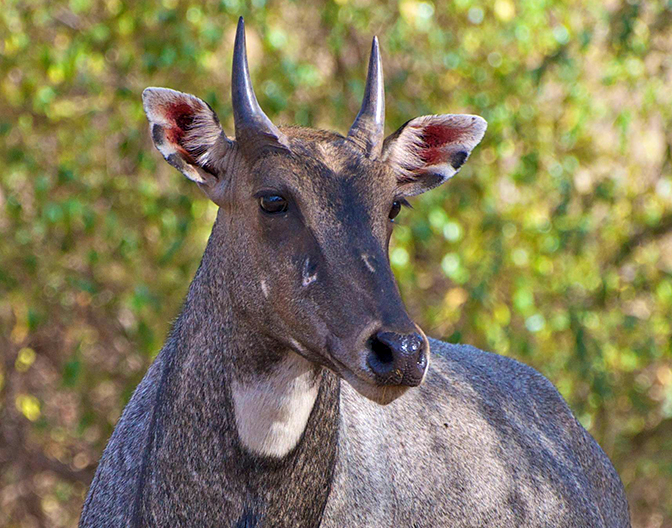 Range:  Rough estimates say there are over five lakh Nilgais in six northern Indian states-Rajasthan, Madhya Pradesh, Uttar Pradesh, Haryana, Himachal Pradesh and Bihar. Uttar Pradesh alone has over 250,000 Nilgais. Nilgai prefer areas with short bushes and scattered trees in scrub forests and grassy plains. They are common in agricultural lands, but hardly occur in dense woods. In southern Texas, it roams in the prairies, scrub forests and oak forests. It is a generalist animal - it can adapt to a variety of habitats. Typically tame, the nilgai may appear timid and cautious if harassed or alarmed; it flees up to 980 feet - or even 2,300 feet, galloping away from the source of danger.

Description: They have a short coat which is yellow-brown in females and turns blue-grey in adult males. Calves are pale brown. The hair of the adult nilgai antelope is thin and oily, but the skin is thick on the chest and neck of the males. There are patches of white on the face and below the chin.

Diet: Nilgai antelopes graze and browse, with grass as the main source of their diet. In Asia, they eat mainly woody plants. In Texas, they eat mesquite, oak, partridge peas, croton, nightshade, and a variety of grasses.

Lifespan: Gestation lasts eight to nine months, following which a single calf (sometimes twins or even triplets) is born. As typical of several bovid species, nilgai calves stay hidden for the first few weeks of their lives. The lifespan of the nilgai is around ten years. 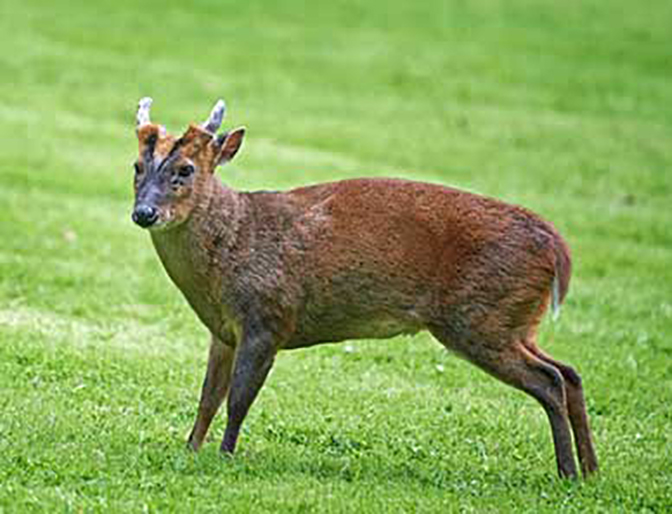 Range:  Reeves's muntjacs are found in southeastern China (from Gansu to Yunnan) and Taiwan. In China, these deer inhabit rocky places and open woodlands of pine and oak. They also occur in low mountains and hilly areas, at forest edges and in shrubby habitats. Bucks can live up to 16 years and does up to 19 years, but these are exceptional. Muntjac are generally solitary or found in pairs (doe with kid or buck with doe) although pair-bonding does not occur. Also known as the 'barking deer', muntjac vocalize in many different situations.

Description: They are characterized by small, backwardly-directed antlers in the males (bucks) and enlarged canine tusks, also in males. The Reeve's muntjac is a small brown deer with branched antlers, and a longer nose than other deer. It has a gray to reddish-brown coat with blackish brown legs, and a white chin and throat with a black stripe along the nape of the neck. Male: Males have small tusk-like canines, which can grow up to one inch.

Diet: They feed on shoots of shrubs, woodland herbs and garden plants, but bramble and raspberry are their most important foods.

Lifespan: Oddly for a deer, but reflecting their subtropical homelands, muntjac breed all year round. If healthy, they can live up to 16 years for males in captivity and female greater than 20 years. In captivity, they can easily add an additional five years to their lifespan. 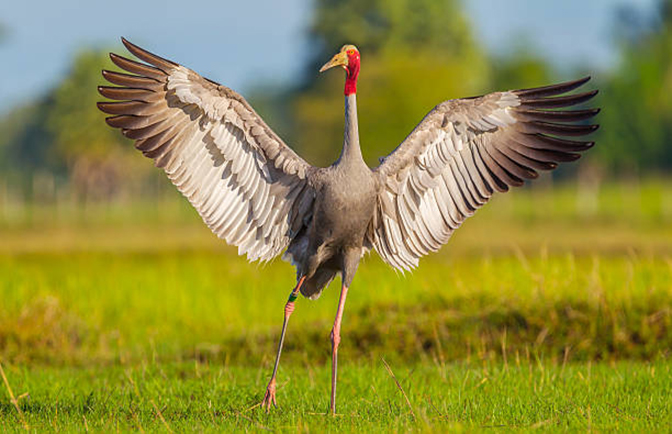 Range:  The sarus crane is a large non-migratory crane found in parts of the Indian subcontinent, southeast Asia and Australia. These cranes live mainly in wetlands such as canals, marshes and ponds, sometimes near humans. They inhabit cultivated areas too, and high-altitude wetlands. Breeding is further inland, but always in a wet area. During the dry season, the Sarus crane occurs in shallow wetlands, wet grasslands or rice fields.

Description: Male cranes are larger than females. They have gray wings and body, a bare red head and upper neck with a narrow band of bristle black feathers, a white crown and black wing tips. It is the tallest flying bird, and can grow to six feet tall. Its wingspan can be up to eight feet and its weight just shy of 20 pounds. It lives in open wetlands. arus cranes are regarded as the least social crane species. Especially when nesting, they can be very protective, and are aggressive towards intruders. Although breeding pairs are territorial, sarus cranes form bigger flocks in the non-breeding season. The size of a flock usually depends on the wetland area.

Diet: Sarus cranes are omnivorous, and eat a wide range of food, such as aquatic plants like sedge tubers, seeds, rice and other grains, crustaceans, snails, large insects such as grasshoppers, amphibians, reptiles, small vertebrates and fish.

Lifespan: The clutch is one or two eggs (rarely three or four) which are incubated by both sexes for about 31 days (range 26–35 days). In captivity, sarus cranes have been known to live for as long as 42 years. 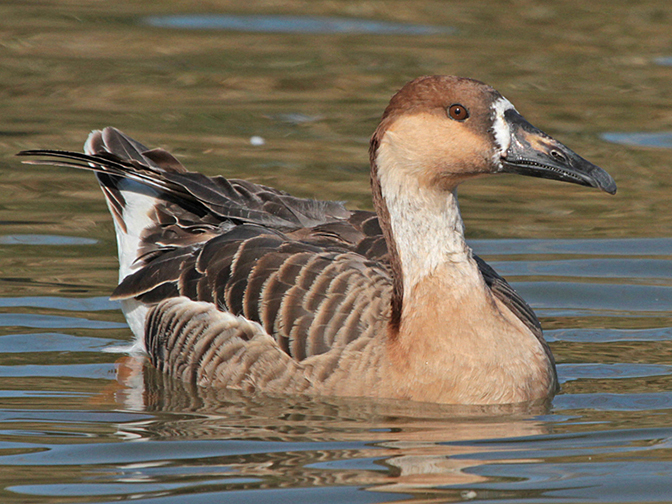 Range:  The swan goose is a large goose with a natural breeding range in inland Mongolia, northernmost China, and southeastern Russia. It is migratory and winters mainly in central and eastern China. They can be found near water in floodplains, marshy meadows, riverbeds, steppes, even mountainous areas

Description: The swan goose is the largest goose species, reaching up to three feet in length. It displays a white throat and a dark brown crown extending along the back of the neck to the wings. The swan goose has a black bill and a chestnut-colored chest. Females have slightly pointed bills. The neck of both sexes differs as well, being shorter and slimmer in females and longer and thicker in males. Additionally, males have larger, wider head crowns than females do.

Lifespan: Geese can lay an average of 40-60 eggs per season. They lay 2 times a year, once in each spring and autumn. The average incubation period for a goose is approximately 28-34 days. Some geese can live to be 40 years old or more. Geese reach their mature size in just 12 weeks.