SEPTEMBER 18, 2019 - The Montgomery Zoo and Mann Wildlife Learning Museum is proud to announce the rare birth of twin female pygmy hippopotamus calves on August 4, 2019 to first time parents, mom, Asali, and dad, Mikey.  This the fourth birth of pygmy hippos in the last four years at the Zoo. Sadly, one of the Asali and Mikey’s calves only lived for two days due to a condition called brachygnathism, which made it impossible for the calf to nurse.

The birth of twins is a major anomaly for the species.  There are only eleven confirmed cases of twin hippo births from 1903-2015.  Of these eleven births there are only four cases where one of the calves survived and only one case of both calves lived. With the high infant mortality rate of pygmy hippos, until about one month after birth, having a set a twins where one survived is significant to research and conservation of the species.

The other calves born at the Montgomery Zoo, Monty in 2016 and Levi in 2018 are now continuing to mature and thrive at the Greater Richmond Zoo in Virginia.

The Montgomery Zoo’s other adult pygmy hippopotamuses can be viewed in their permanent exhibit in the Africa realm of the Zoo.

The public and press are invited to join the Zoo on September 19, 2019 at 10:00 am to celebrate the calf’s introduction to the public.  Mom and baby will be housed in a temporary habitat located in the South America realm of the Zoo, near the flamingos, until the calf is about a year old. 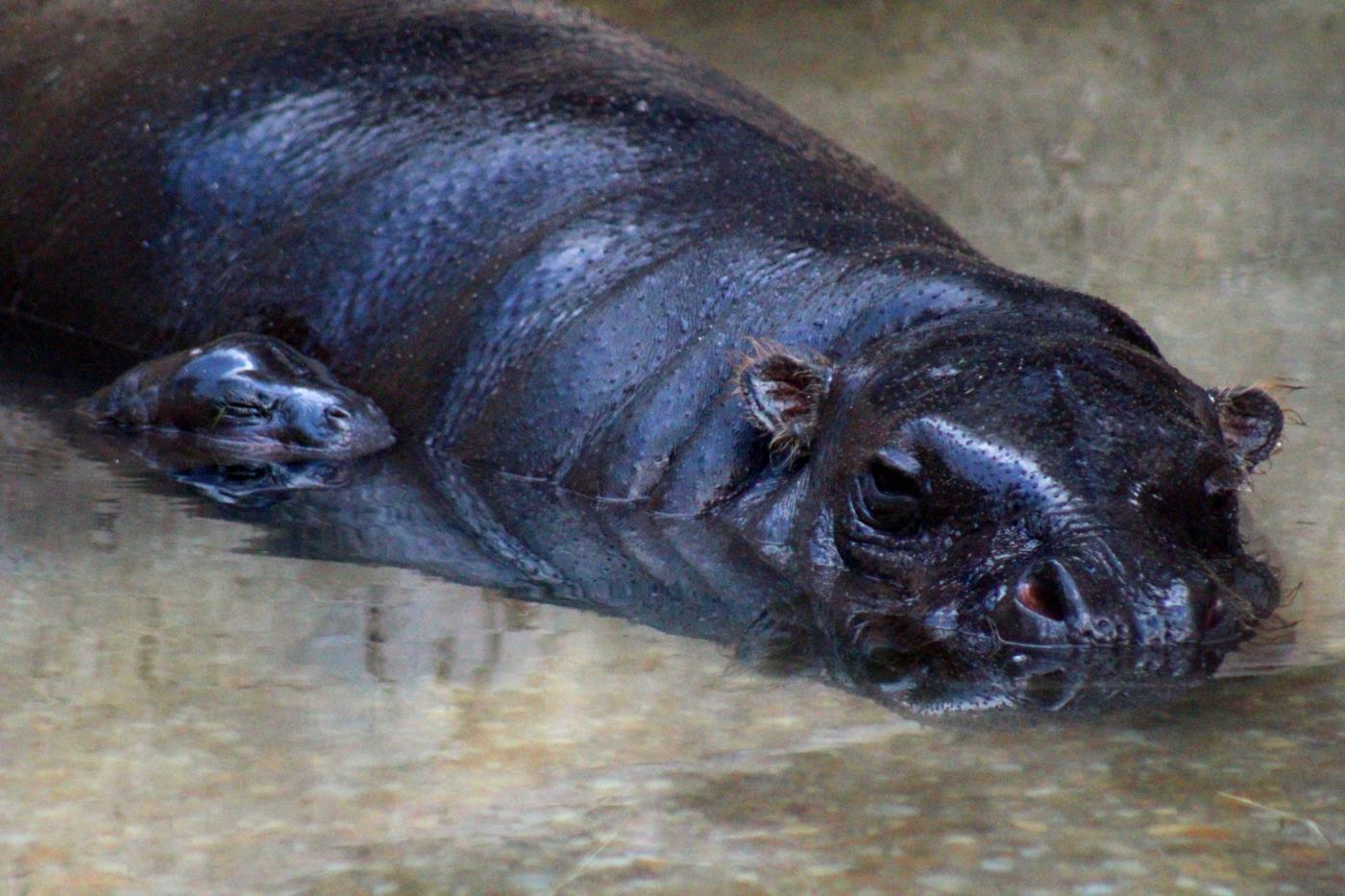 The pygmy hippopotamus is a large mammal native to the forests and swamps of western Africa. A cousin of the much larger common hippopotamus, the pygmy hippo is semi-aquatic and relies on proximity to water to maintain moisturized skin and a cool body temperature. Reclusive and nocturnal, it is a difficult animal to study in the wild. However, pygmy hippos have a history of breeding well in captivity. The World Conservation Union estimates that less than 3,000 pygmy hippos remain in the wild.

Though pygmy hippos share the same general form as the hippopotamus, they grow to approximately half the height and one quarter of the weight of their larger cousins. Full grown, the pygmy hippo typically reaches 30-32 inches in height, 59-70 inches in length, and 400-600 lbs. in weight.  It is estimated that pygmy hippos can grow to ten times their birth weight by the age of five months.

About the Montgomery Zoo and Mann Wildlife Learning Museum

The Montgomery Zoo and Mann Wildlife Learning Museum is a 42-acre zoological facility, located minutes from downtown Montgomery dedicated to animal conservation and education.  The Zoo is home to approximately 400 animals from Africa, Asia, Australia, North and South America.  The Mann Wildlife Learning Museum spans 28,000 square feet and houses one of the Southeast’s largest collections of preserved North American wildlife and artifacts.

The Montgomery Zoo and Mann Wildlife Learning Museum is open daily from 9:00 am-4:00 pm. For more information contact the Zoo at 334-625-4900 or visit montgomeryzoo.com